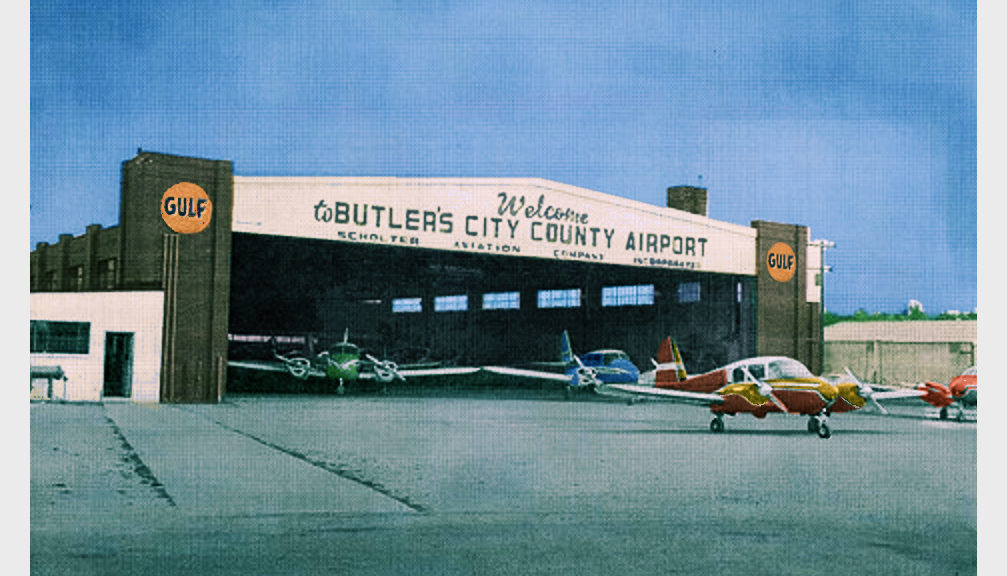 A Brief History of the Pittsburgh-Butler Regional Airport

Heartfelt thanks go out to the late Dick May (long time airport authority member and Butler County Historian), for his many years of collecting and sharing his valuable knowledge.

September of 1929 marked a transition in both the U.S. and Butler County. The Dow Jones Industrial Average reached an all time high (381.17,) promptly followed by the Crash of 29′. Butler County Airport, dedicated the same month, further coincided with the Pirates dropping a game to the Braves thus clinching the National League pennant for the Cubs.

In the aviation community Lt. James H. Doolittle guided a Consolidated N-Y-2 biplane over Mitchell Field, New York, in the first all-instrument flight. And Fritz von Opel, millionaire daredevil, traveled one and a quarter miles in the first man made rocket plane.

At the time, Butler County was earmarked for the distinction of becoming the location of Pittsburgh Butler Airport. Pittsburgh was in the midst of a great industrial development. However, the thriving metropolis had a major air and water pollution problem. Raw sewage was customarily dumped into the Ohio River.
Pittsburgh originally considered the polluted air as a sign of prosperity. The more smoke the more money. During the lengthy clean up they did realize Butler County was a much cleaner place to locate an airport than Allegheny County.

Established by Pittsburgh Aviation Industries Corp. the airport opened its 230-acre site in Penn Township, as the Pittsburgh-Butler Airport on September 27 and 28, 1929. The airport was constructed six miles south of Butler on what were originally the Nixon and Dodds farms.

Small airports already existed in the county at the time. Prior to Butler becoming more or less a precursor to the Pittsburgh International Airport, there were other landing sites. Hopefield Airport near the now Butler Farm Show Airport shared the limelight along with Alameda Airport, across from the Deshon Veterans Administration Hospital. Some lesser landing strips existed near what is now Saxony Farms in Saxonburg.

The first flight in Butler County took place in 1909. Roy Knabenshu (pioneer engineer and designer who previously worked with the Wright Brothers) of Toledo, Ohio flew over Butler in a one-man dirigible. The craft was inflated with hydrogen gas and powered by an air-cooled engine. It was propeller driven, had a rudder and throttle and no ailerons. Control apparatus consisted of his walking toward the nose or tail, depending upon whether he wished to ascend of descend. Hardly fly-by-wire.

The trip spanned the distance between the old fairgrounds on Bantam Avenue to the courthouse and back. The fairgrounds were located on the hill where Butler High School now stands.

Trans World Airlines showed interest in Butler County. Actually for a period of time TWA owned the assets of the facility and changed the name to Keystone Airport. Although they never flew into Butler, the airline did own the rights to all of the air routes in the area. TWA’s involvement with Butler was kept alive because of the strategic right of way, in particular for their expanding transcontinental flights.

John “Jack” Graham II and the Pittsburgh Institute of Aeronautics

Mr. Graham sold the airport and took over his father’s position as CEO of PIA (the Pittsburgh Institute of Aeronautics), an aviation maintenance training school at the Allegheny County Airport in West Mifflin. It has since grown and now has expanded to sites in: Charleston, Clarksburg, Hagerstown, Myrtle Beach, and Youngstown. Finally in 1950 PIA moved its aircraft mechanic and instrument course facilities to Allegheny County Airport.

Originally, however, in December of 1944 William J. Graham, a Pittsburgh plumbing contractor who dabbled in aviation, purchased one-half interest in the school. He had no idea his aviation hobby, as a private pilot, would take off to such a great degree.

In addition to the new aviation school (PIA) at Butler he operated training courses for the Civil Aeronautics Authority at the Pittsburgh-Butler Airport including locations at: Oil City, Meadville, Bridgeville, Waynesburg, and Natrona Heights airports.

Flying had gone from a hobby for Mr. Graham to a serious business serving Uncle Sam, according to a Dec. 15, 1940 article in the Pittsburgh Press (I.E.- the eventual military training field at Butler).

He further advanced aviation classes at the time by renting an auditorium at Allegheny High School and opening a free ground school course. Classes were held one night a week and instructors included Mr. Kenny Scholter, Harry (Skip) Taylor, Norman Kite, and Karl Litzenberger (source – Pittsburgh Press, Dec. 15, 1940). The ten-week course boasted 900 eager students nightly. Make it free and they will come. It was not long after this point that civilian pilot training programs were introduced into Pennsylvania college curricula.

It is also interesting to note that in an Oct. 29, 1939 Pittsburgh Press article, Mr. Graham was recognized as a friend of private pilots. He explained that County airport in Pittsburgh concentrated only on the needs of the commercial air carriers, the wishes of general aviation pilots being ignored.
The article goes on to explain that since Mr. Graham has taken over Pittsburgh-Butler Airport it has become a mecca for private and sportsman aviators in the Pittsburgh area.

A little known fact regarding Mr. Graham is that he had a yellow Cub on floats. He negotiated with the powers that be in Pittsburgh and started a seaplane base on the Allegheny River.

As years progressed, the Butler County Airport Authority began purchasing tracks of land from Mr. Graham. Approximately 7 deeds/parcels finally lead to the final purchase of the property from Graham Aviation.

As they say in politics: “yes and no.” In other words Amelia was here but Lucky Lindy was not. You may see photos of Lindy standing with the legendary Kenny Scholter, however, the photo was taken before Kenny came to Butler County Airport. Lindy was in Pittsburgh where Kenn

y had cut his aviation teeth at Bettis Field, an airstrip in West Mifflin, Pa.

It is said that Kenny in his teenage years would cut school and ride his bike to the airport where he eventually worked until coming to Butler. Many times he slept in hangars to save the bike riding time so he could be there in the early morning hours to earn more money for flying time.

Amelia Earhart, on the other hand, did in fact do much more at Butler County than get her photo taken. She received her instrument training here in addition to having long range fuel tanks installed on her Lockheed 5B Vega.

In 1932 she flew the single engine aircraft called “The Little Red Bus,” across the Atlantic Ocean and eventually nonstop across the U.S.

In 1935 C.G. Taylor moved his Taylorcraft Aircraft Company from Bradford, Pennsylvania to Butler. The aircraft (a small single-engine, fabric covered, two passenger, side by side aircraft) had the original design drawn out on the floor of Butler’s historical hangar C-1.
The original Taylor Cub (not the actual Taylorcraft) was designed in 1931 by Clarence Gilbert Taylor, a self-taught aeronautical engineer from Nottingham, England. Curiously, the company slogan was: “Buy Your Airplane Taylor Made.”

One of the investors in the new Taylorcraft Company was the celebrated William Thomas Piper. Piper (who originally made his money in the flourishing oil industry) shared Taylor’s dream of making aircraft as common as cars for Americans.

The men could not agree upon design ideas. Piper left Taylor high and dry, necessitating his (Taylor’s) move to another airport to continue the design and construction of the prototype Taylorcraft.
The Butler County location was ideal for him and his struggling; upstart company. The two brick and steel hangars, one-hundred-sixty feet long and one hundred wide were too much to pass up. Thus began the design and construction of the now famous Taylorcraft.

The legendary name of Scholter again appears at this time in aviation history. Kenny was instrumental in the construction of the original Taylorcraft during the crucial 5-month segment involving the building of special equipment and parts procurement, in addition to doing all of the welding on the aircraft.

During World War II domestic aviation was of course diminished enormously for many reasons, one of which was the rationing of fuel. As a result, Butler County contracted with the federal government in general and the Army Air Corps in particular to transition Butler into a cadet primary training facility. Potential aviators included candidates from America, Canada, the British Isles and a number of other Allied nations.

Primary pilot training taught the basics of flight in two seat aircraft. Butler was one of the contract schools headed by the Civil Aeronautics Authority – War Training Service (CAA-WTS). Cadets received 65 flight hours in trainers before shipping off to a more advanced training facility. Butler was one of the sites where the fledgling pilots were given their first opportunity to wash out of the program.

Recruits were housed in dorms and bused in from Grove City and Slippery Rock Colleges. Of course at the time Slippery Rock enjoyed the title of college as opposed to its current university status. Butler’s training facility lasted the duration of the war.

Nineteen forty-nine (the same year Cambridge University (UK) invents stored memory) the Butler County Airport Authority is formed. This development along with their purchase of the runway enables the authority to apply for federal funds, thus enhancing the potential for facility and community growth.

After the purchase the runway was paved in 1950. And in 1980 the authority acquired the entire airport as it now stands.

Many venerable names in historic aviation circles have been involved in the development of the Butler County Airport. The brief history you have read is just that – a brief history. Those names along with more detailed information of the figures mentioned above can be found in The Taylorcraft Story by the famous aviation historian Chet Peek, (Aviation Heritage Library Series; Sunshine House Inc.) Copyright 1992 Chester L. Peek.

A history, such as the one you have just read, is by its very nature a collection of much ‘word of mouth’ and some researched historical fact. The authors apologize of any errors and/or omissions and hope the writing is taken in the same kind and thoughtful manner in which it was written.

If you have any historical photos, stories, memorabilia, or information about our airport’s history, please contact Jim Opalka through the airport office. It would be greatly appreciated.